Deal or No Deal Wiki
Register
Don't have an account?
Sign In
Advertisement
in: Models, People, Living people 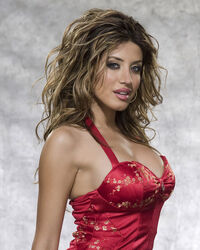 Leyla Milani (born Leyla Razzari on April 2, 1982 in Toronto, Ontario) is a Canadian-American model, actress, TV host and fashion designer. Best known to TV Game Show audiences as Briefcase Model #13 on the NBC Game Show Deal or No Deal. She is also active in the wrestling field.

Leyla started as a contestant in WWE's (World Wrestling Entertainment's) 2005 RAW Diva Search in which she came in second place. In 2006 she starred in the indie horror film Wrestlemaniac, where she played Dallas. She continued having close ties to the wrestling world; in fact, she co-hosted alongside veteran wrestling manager Jimmy Hart, a show Hart created called Wrestlicious.

A few months after her stint at the Diva Search, she became one of the 26 briefcase models on the newly NBC Game Show Deal or No Deal, first premiering during the week of December 19-23, 2005 and returning as a primetime regular in February 2006. Throughout it's entire run, Leyla stood beside Briefcase #13 which nine times out of ten, didn't always turn out great game wise. In season five, she will be replaced by Mahogany Lox.

During it's 2005 Premiere week and for most of season one, her case usually had one of the six six-figured amounts or the big one: $1,000,000. In fact it has been that way for the first several shows until one episode in 2006 revealed that Leyla's case finally held a low amount for the first time, but whatever the amount she had in her case, and with that case, she was given the nickname "Lucky Leyla".

At the 2009 Game Show Awards, Leyla appeared alongside her fellow Briefcase Models Lisa Gleave, Patricia Kara, Claudia Jordan, and Megan Abrigo representing Deal or No Deal as they won the award for Favorite Game Show Models.

Milani also competed alongside fellow Briefcase Models Kara and Marisa Petroro on a Celebrity edition of the GSN Original series Catch 21 (hosted by Alfonso Riberio). She was the first person eliminated from the game which was won by Patricia, winning a grand total of $2,500 for the charity she was playing for.

Aside from her modeling, wrestling, and acting gigs, Leyla is also involved in the fashion world. She even has her own line of hair extensions called "Milani Hair". Leyla is in fact known for her lion-like mane.

She was also a referee at the Lingerie Bowl III in 2006. 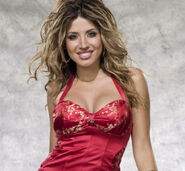